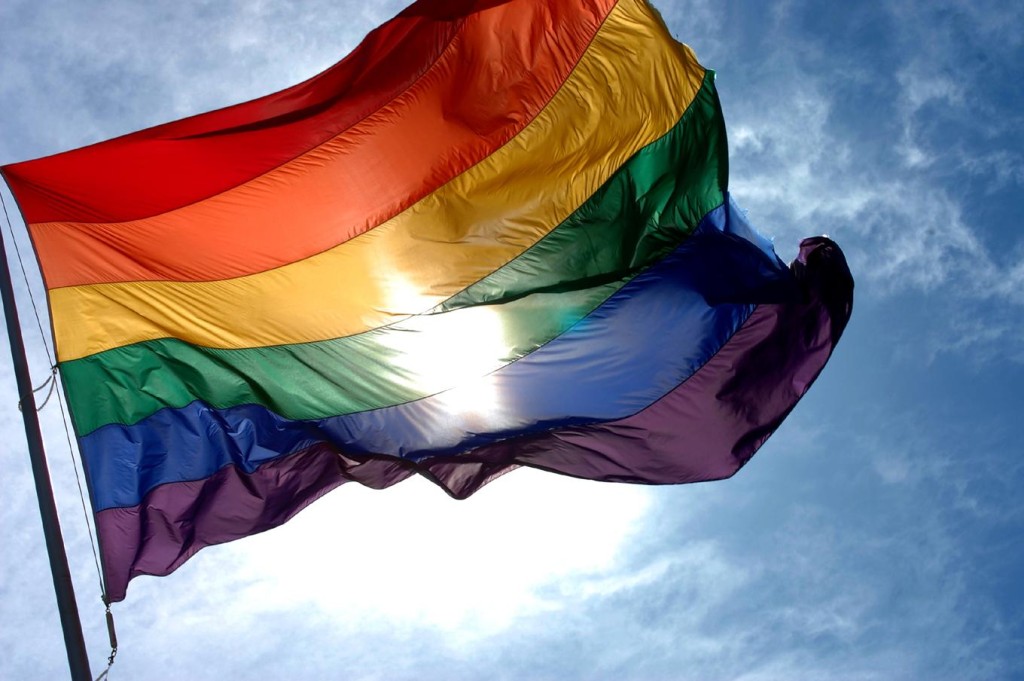 MMF: Were you interested in vexilography before you designed the Rainbow Flag?

Baker: Vexilography is a very big word! Vexilography is really the high science and art and understanding of flags and their history, the academic word for flag making and heraldry. No! To a degree, it all began in 1976. That was the bicentennial of the United States and that year in particular I began to notice the American flag—which is where a lot of the Rainbow Flag comes from—in the sense that all of a sudden [I saw] the American flag everywhere—from Jasper Johns paintings to trashy jeans in the Gap and tchotchkes.

And I thought, a flag is different than any other form of art. It’s not a painting, it’s not just cloth, it is not a just logo—it functions in so many different ways. I thought that we needed that kind of symbol, that we needed as a people something that everyone instantly understands. [The Rainbow Flag] doesn’t say the word “Gay,” and it doesn’t say “the United States” on the American flag but everyone knows visually what they mean. And that influence really came to me when I decided that we should have a flag, that a flag fit us as a symbol, that we are a people, a tribe if you will. And flags are about proclaiming power, so it’s very appropriate.

So the American flag was my introduction into that great big world of vexilography. But I didn’t really know that much about it. I was a big drag queen in 1970s San Francisco. I knew how to sew. I was in the right place at the right time to make the thing that we needed. It was necessary to have the Rainbow Flag because up until that we had the pink triangle from the Nazis—it was the symbol that they would use [to denote gay people]. It came from such a horrible place of murder and holocaust and Hitler. We needed somethingbeautiful, something from us. The rainbow is so perfect because it really fits our diversity in terms of race, gender, ages, all of those things. Plus, it’s a natural flag—it’s from the sky! And even though the rainbow has been used in other ways in vexilography, this use has now far eclipsed any other use that it had….

MMF: Tell us about the process and circumstances of developing the concept for the flag in 1978.

Baker: I write a lot about this story—it was about being in the right place at the right time. A flag starts with some fabric in the wind. I knew how to sew—as I said, it came from being the drag queen that couldn’t afford the clothes I liked so I had to make them all. That translated, because I was in San Francisco in the early ’70s, into being the guy that would make banners for protest marches. I was in the army and got out in 1972 and that became my role, if you will. My craft became my activism.

I decided the flag needed a birthplace so I didn’t make it at home—I made it at the Gay Community Center at 330 Grove [Street] in San Francisco. We took over the top-floor attic gallery and we had huge trashcans full of water and mixed natural dye with salt and used thousands of yards of cotton—I was just a mess [from the dye], but [it was] beautiful fabric, organically made. I wanted to make it at the center, with my friends—it needed to have a real connection to nature and community.

When the flag actually went up, it was a very important thing that we raised them—there were two of them—in the United Nations Plaza [in downtown San Francisco]. We picked the birthplace very carefully, and it happened on June 25, 1978. That was deliberate—even in those days, my vision and the vision of so many of us was that this was a global struggle and a global human rights issue. And now here we are all these years later—we’re not there yet by any stretch of the imagination but in my lifetime we have come far.

MMF: You were 27 years old when you made the first flags. Much has changed for the gay community between then and now, and this flag has played a large role in that. What do you think the most important effect of this design has been?

Baker: Much has changed for some, but as a global vision, we are way far away from where we need to be. We are still dealing with huge, massive resistance, even here in our own country, even here in our own city, even in our own families. What the rainbow has given our people is a thing that connects us. I can go to another country, and if I see a rainbow flag, I feel like that’s someone who is a kindred spirit or [that it’s] a safe place to go. Its sort of a language, and it’s also proclaiming power. That’s the phenomenal [aspect] of it. I made it in 1978 and I hoped it would be a great symbol but it has transcended all of that—and within short order—because it became so much bigger than me, than where I was producing it, much bigger even that the U.S. Now it’s made all over the world. The beauty of it is the way that it has connected us.

MMF: You had a team of about 30 volunteers who helped make the first flags. Do you remember who any of them were? Can you tell us a little about any of them?

Baker: Sure! I want to give them all credit—there were so many people involved. Let’s go back to the fabric, where it starts. I think I got $1,000 from the parade committee, Cleve Jones, who later became an important activist for AIDS, was my friend, he ran the media committee for the parade and he helped me get the money—I said the flag would help visibility, create a story.

The next call I made was to a friend of mine—Fairy Argyle Rainbow. (I think I added the Rainbow on her name at a later date.) She was a hippie girl, was the queen of tie-dye. I knew I wanted to do an organic dye process—I knew Fairy from the Angels of Light [an experimental free theater group of the 1970s] and she was totally game. We made such a huge mess, we had so much fun!

I then called another friend of mine, James McNamara—he knew how to sew, he’d been to FIT [the Fashion Institute of Technology in New York] and was the only person who knew how to sew as well as I did. It took four hands to move the fabric through the machine, 20 hands to iron the fabric. I remember one day we had it all in the dye bath—you have to set the dye, and then you have to rinse it out. We looked at each other thinking “we’ll take it to the Laundromat.” Well, they have all these signs at the Laundromat saying “do not dye” so of course we wait until everyone is gone late at night and run into a Laundromat and fill every machine with quarters and blast them all—and [the machines turn] every color of the rainbow! We threw Clorox in [the machines] afterwards hoping that the next customers weren’t walking out of there with pink underwear! It was certainly not like the way they are made today, but I treasure those memories because it really was a beautiful process and I really love all the people who were there.

MMF: What is the most surprising or unusual place you have seen this flag displayed?

Baker: I can’t even begin to tell you how many times my mind has been blown! How many times I have said, “no one will ever buy this thing” [that uses the rainbow flag motif] and then watched someone make millions on little rings. I remember someone did it in rubber, and I thought it was clever but wondered what in the world it was for—and it was for the floor of your car! I thought no one would ever use it, and I was right. But what they ended up redoing was making it into a floor placemat for your pet so you could have your bowl and your dog dish on it. So the most surprising thing for me is the way that people have used it for their pets. I’ve never seen one great piece of fashion—but when I see it on pets I have to laugh. People will never wear that but they will put it on their dog!

MMF: Before you go, can you tell us a little about some of the photographs we have in front of us that show the process you of sewing the Rainbow Flag? Baker: Sure! These are by Mick Hicks, a [San Francisco] Chronicle photographer. He’s someone I give a lot of credit to. One of the reasons I had to adapt the eight-color version to the six-color version of the flag—the one we use today—is because in 1978 eight colors was expensive. Even to do four-color printing for photographs like this was complicated. I realized I would have to make some compromises in order for this to really function as a symbol. So Mick was someone I met early on, and I made it a point to be friends with photographers because I knew that their art was going to be key to the success of the rainbow flag, in the way that there would be pictures of the flag that went out around the world and in the way that there would be beautiful pictures used just as art. So Mick is someone I am really close to and someone who has contributed some really wonderful photographs….The Original 8-color Rainbow Flag, San Francisco United Nations Plaza, June 25, 1978. Photo: James McNamara. Courtesy of the artist

And then this photograph is by James McNamara. In this flag, Fairy and I put in some tie-dyed stars. I wasn’t sure that people were going to get that this was a flag, that it wasn’t just some decoration up there in the air. So to make sure, we thought “well, the American flag has stars, we’ll put stars in one of our flags so that everyone understands.” Only our stars were in circles of eight and tie-dyed!

[We moved away from] cotton and hand dying in the end. It’s very temporal—it’s pretty but if it gets wet, the color runs…so now they’re nylon. The nylon caught on for two reasons: first of all, it’s very durable, and second, it lights beautifully. Dupont puts out a great product just for flags, it’s called Oxford Weave and it lights rather like stained glass and in some of the photographs you’ll see the sunlight coming through and it makes a rainbow on the pavement. That’s something that I think really captured the public’s imagination.
1.584 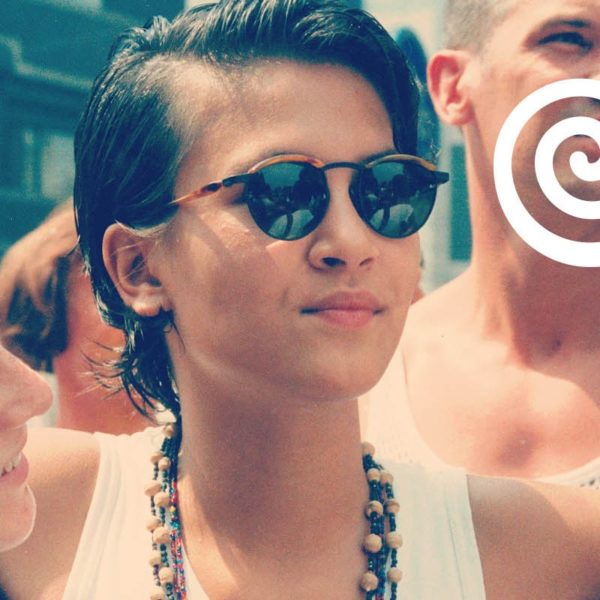 I’m intersex. You are trans.